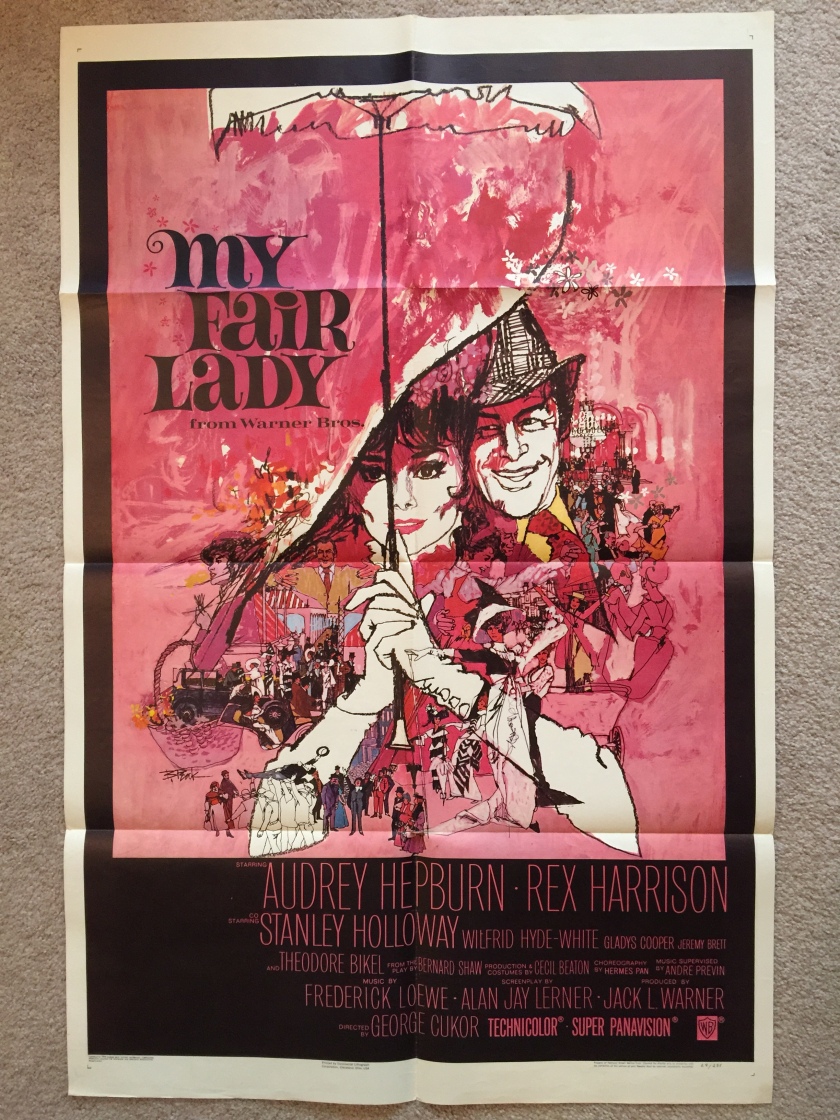 To be honest, I haven’t seen the film “My Fair Lady” with Audrey Hepburn and Rex Harrison for quite a few years now.  But when I first did on television back in the 1990’s, it left quite a lasting impression (how could a movie not do so with songs like “I Could Have Danced All Night” and “The Rain in Spain”).  From that time up until recently, I was also familiar with the 1994 re-release photographic poster art in which Audrey Hepburn is prominently displayed on the right side of the poster in a white dress and hat while a smaller Rex Harrison is on the left with both arms raised in the air just below the film’s title.

Now, as posters go, the 1994 re-release is very nice, but then I discovered the original 1964 U.S. one sheet.  What a world of difference!  Artist Bob Peak wonderfully captures the magic of the film with the portraits of the stars, the scene montage beneath them and the overall pink background.  The photographic re-release is good, but the painted Bob Peak art is great…no wait…amazing!

The original 1964 “My Fair Lady” U.S. one sheet displayed in this blog post is in very fine condition with typical fold wear.  The paper the poster is printed on is also what one would expect from a 1960’s U.S. one sheet (e.g. “Dr. No” or “From Russia with Love), with a texture that is rougher, thinner and more “paperish” to the touch than the smoother, thicker, glossier texture belonging to most current U.S. one sheets.  Also included is a close-up picture of the NSS stamp from the poster backside.

In summary, a delightful poster to own and handle for a fantastic film!

Copyright Notice:  The artwork and poster designs featured are copyright of the relevant studios or artists and are displayed on this website for non-commercial purposes only.